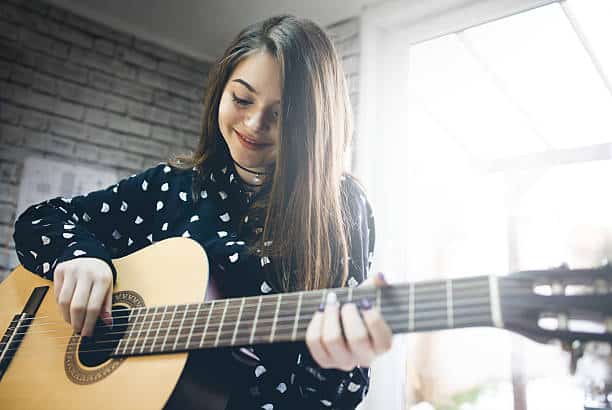 This is another exciting song to share with you the budding singer/guitarist. Guitar songs for girls #2 is Norah Jones SUNRISE, it is an easy guitar song for girls to play.

It has a tricky tempo as you will find as you try the chords with the YouTube recording but don’t hesitate to find your own strumming pattern.  Or Slow it right down and pick the strings, make it your own.

YouTube is only a guide in case you don’t know the song. Watch and learn how she phrases her sentences. If you want to play along with the original, you will need to put a Capo on the third fret to be in the same key as Norah Jones.

So grab your guitar, tune-up, find yourself a comfy spot where you can have your computer in front of you. Firstly, have a listen to the original without playing.

I know that it is easy to just sit and enjoy the YouTube. But what I want you to do while you enjoy, is follow the chords on the chart below. Place your finger on each chord that aligns with the word Norah is singing. This will train your ear to recognize a G, Am, and C, etc.

Subconsciously, you will also be taking in the timing (tempo) and the way she phrases her sentences. If you focus carefully this initial analysis will help you to play the song more easily.

Note the tempo of the song

practice with a YouTube. Play the song again and tap on your leg the timing of each beat. It’s an unusual timing because although they are using 4 beats to the bar, Norah isn’t always singing on the first beat.

That is why it sounds so very different from an easy song. This song is in 4/4 time. That is 4 beats to a bar. Now in simpler songs, the first word starts on the first beat of the bar but in Norah’s song she often pauses before finishing a sentence from the third beat.

She is a little tricky but that is why here music is so unique. There is no reason that when you play the song that you can’t line up the words and beats.

Analyze the speed and phrasing of the sentences

This may seem like a simple ballad but Norah adds her own unique style by starting some sentences a beat into the bar to create a bobbing tempo. The guitarist and lute player are also picking the chords, not strumming. If you need to consider strumming styles have a read of this post.

Consequently, you may need to slow the tempo down and sing your sentences from the first beat until you get a feel for her style. I’m sure whatever tempo you choose will sound great but dig out your metronome and practice with it to keep that steady pace.

Listen for the dynamics of the song

Getting creative with the dynamics throughout a song is the neatest trick that professional musicians use when performing. If everyone is playing at the same volume it loses that emotional touch.

None of these instruments is louder than Norah at any time. She is the key to the song, the star if you like. Therefore, keep in mind your guitar volume and always maintain it quieter than your singing.

Then, as you sing, vary your voice volume. Perhaps, you sing louder in the chorus and quieter during a verse. Keep your diction nice and clear as it is so frustrating for your listeners, to not be able to enjoy the story because you are mumbling.

Look below and check that you can play each chord

You may have noticed when an orchestra or band gets a new chart, all the musicians will check the whole song very quickly. What they are looking for is any chords that they don’t know or which variation of the chord will work best. They are noting how many verses, is there an instrumental part and how does it end?

There are 6 chords, G, Am, C, F, D, and one Em. If you don’t recognize one of these chords it will only take you a moment to look it up in google on your phone. Pick the simplest one for you (this is not a competition). Draw the chords into the little chord boxes so that you can reference then each time you play this song.

This is a good habit to get into!

The chords below are in the key of G, 3 frets up you are looking at the key in Bb.

Sunrise, Sunrise. Looks like mornin’ in your eyes, but the clock’s held

Nine fifteen for hours. Sunrise, Sunrise, couldn’t tempt us if it tried

Cause the afternoon’s already come and gone.  And I said.

Surprise, Surprise, Couldn’t find it in your eyes but I’m sure it’s written

All over my face. Surprise, surprise, Never something I could hide

When I see we made it through another day.  And I said.

Now the night will throw its cover down, on me again, Ooh, and if

I’m right, It’s the only way, to bring me back.

A bit about Norah Jones

Norah Jones (born Geetali Norah Jones Shankar; March 30, 1979) is an American singer-songwriter, musician, and actress. She is the daughter of sitar virtuoso Ravi Shankar and Sue Jones. She is Anoushka Shankar’s half-sister.

In 2002, she launched her solo music career with the release of the commercially successful and critically acclaimed album Come Away with Me, a fusion of country music and pop with elements of jazz which was a certified diamond album, selling over 26 million copies.

In 2009’s The Fall all gained Platinum status, selling over a million copies each and were generally well-received by critics. Jones’ fifth studio album, Little Broken Hearts, was released on April 27, 2012.

Come and join me again in learning another song for your repertoire, as we slowly make you into a singer/guitarist.

Please leave a comment and share it. I’m always willing to chat and help you on your musical journey.